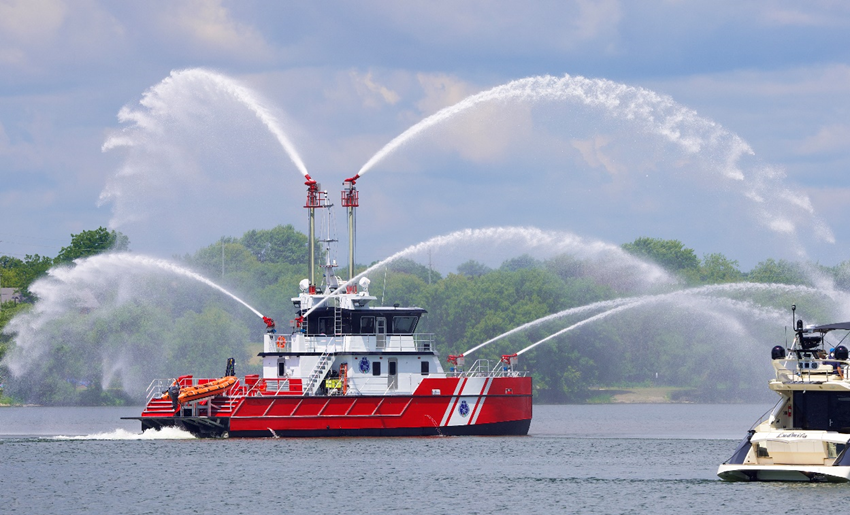 The recognition came for the FireCat 25M, the first catamaran fireboat ever built. Constructed for Kuwait Fire Force and christened the Monjed 2, the project was conceived in 2015 by the Director of Fire Force.

MCM collaborated with Walker Marine on the design with some specific requirements in mind. The boat needed hulls that were big enough to house large diesels and firefighting equipment, and towers that were tall enough to reach the decks of huge oil carriers that travel through Kuwait Ports. As well, the catamaran design needed a low center of gravity to support the force of 12,000 gallons of water per minute that shoot from the 45-foot water cannons, and it had to be stable enough to manage rough seas.

Manufactured primarily at the MCM site in Kingston, ON, thousands of hours were spent constructing this innovative design and the result is the 32 MPH, 182,000lb FireCat 25M catamaran fireboat.

Every year the editors of WorkBoat Magazine compile a list of the 10 most significant boats of the past 12 months based on a variety of criteria including original concept builds, innovative design, and advancing new workboat frontiers. From that top 10 list, industry peers, readers of WorkBoat Magazine and social media followers vote for the Significant Boat of the Year. The award is considered one of the most prestigious in the workboat industry. This year MCM was a standout and won 50% of the votes that were received.

“It is a great accomplishment for any team to win boat of the year and we’re extremely proud of this build,” says Bob Clark, MCM Contracts Manager. “Something like this has never been done before. Not only can the FireCat 25M replace the old-style tug fireboats for half the cost, but it can also run at twice their speed. We are revolutionizing the concept of what a fireboat is and what it can do!”